I fancied a bit of a change from my normal local photography outings, so decided to combine a trip to the shops, with a walk around Bradford's Little Germany District.

The buildings within Little Germany date back to the 19th century, developing from 1855. Most of the buildings were constructed for the use of textile businesses, although there are also a few non-commercial buildings, for example Baptist and Methodist chapels. The commercial buildings are the legacy of merchants from mainland Europe, many of them Jewish who spent large sums of money constructing imposing warehouses for the storage and sale of their goods for export. A large proportion of the merchants came from Germany hence the name Little Germany.

In modern times a lot of the buildings have been transformed into desirable apartments and with that has come cafés and street art. One of the most striking pieces is a wall sculpture of Bradford artist David Hockney. The eye-catching Hockney artwork, which was the world’s first sculpture made out of painted nails, is 16ft high and 12ft wide. Around a quarter of a million nails make up the artist’s portrait and were hammered into a base of lacquered marine plywood and fixed onto the wall.

Another striking sculpture is Grandad's Clock and chair, which is made out of stone by Timothy Shutter, and is an amusing interpretation of a mill owner’s office with a comfortable chair, mirror and grandfather clock. The work looks back to the past, but the swinging pendulum of the clock indicates that time does not stand still and the past has an important contribution to make to the future.

Whilst I was there, the BBC were filming a new series of All Creatures Great And Small, so part of the area had been cordoned off and period features built and vintage vehicles had been brought in. Although I wasn't allowed to get too close, I did manage to take a few photos.

Unfortunately, due to the COVID-19 crisis, I wasn't able to visit Bradford Cathedral which stands on the edge of Little Germany. It doesn't look too impressive from the outside, but looks can deceive as the interior is quite stunning.

The excitement of the filming more than made up for the disappointment though. After all, I can re-visit the Cathedral anytime.

I fancied a bit of a change from my normal local photography outings, so decided to combine a trip to the shops, with a walk around Bradford... 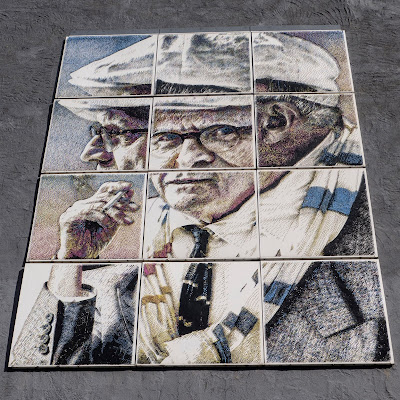