I've done some daft things in my time but I think driving all the way down to Somerset for a weekend stay was near the top of the list. I have wanted to visit the area in autumn for some time due to its many areas of deciduous woodland and I suppose the uncertainty of the past two years has given me the inclination to just go and do things, mainly because you just don't know what the future may hold.

I'd have loved for Sal to have come with me but she wasn't in a position to do so, consequently I just bit the bullet, booked three nights in the excellent Dunster Castle Hotel, packed my bag and set off!

I had an itinerary worked out, I wanted to go to Tarr Steps, Watersmeet near Lynmouth and go for a walk in Horner Woods near Porlock. In the end I only managed one out of three but the things I did do, more than compensated.

On the way down I stopped off in Watchet just to say hello to the place. Me and Sal have started staying there every year and we use it as a base to tour Somerset and parts of Devon. Its a friendly little town with some cracking pubs, a great little deli, is home to The West Somerset Railway and, if you are lucky, gives the best sunsets imaginable.

I then travelled a few more miles down the road to Dunster and settled in to my hotel before going down to Minehead for a walk along the seafront. Unbeknownst to me there was an event on at Butlins so all the holidaymakers were arriving which meant I was stuck in a traffic jam for ages which I found quite ironic as I had travelled half the length of the country and had no trouble at all with traffic until then.

On my first full day, I didn't get to Tarr Steps (see Tarr Steps), due to drizzle and basically miserable weather, but I compensated for that by going for a lovely walk in Whits Wood at Nutcombe Bottom, which was only a couple of miles from Dunster and then, in the late afternoon, went to Porlock Weir where I sat out in the drizzle and had a very enjoyable coffee.

On my other full day, I did go to Horner where I parked up and did a short walk but didn't venture far in to the woods as I wanted to go to Watersmeet, Lynmouth and Watchet. There are only so many hours in a day, especially at this late time of year, so something had to give.

The weather was kind to me all day, which meant that the autumn colours at Watermeet was just spectacular. It is the meeting place of Exmoor's East Lyn River and Hoar Oak Water and from there they flow through a steep wooded valley to The Bristol Channel at Lynmouth.

I then drove in to Lynmouth where I parked up and went in search of some food. The only place I found was an ice cream takeaway which was doing hot Cornish pasties. Not feeling very confident, I bought one and to my surprise it was absolutely lovely.

Still having an hour or so's light left in the day, I drove back to Watchet and visited the new East Quay Arts development which has proved very controversial with the locals. The construction is, to say the least, different and not traditional in any way shape or form but I really liked it and managed to have a coffee there just before it closed. I have added a few photos to the end of the blog you get an idea of what it is like.

And that is my weekend in a nutshell. I enjoyed myself, fit lots in but I missed Sal's company.The autumn colours certainly lived up, and even exceeded my expectations. I called in to Watchet the next morning, bought a sandwich and Scotch egg from Sam's Deli and hit the road back up North.

A day later and a  return to Middleton Woods in Ilkley, this time it was to see the wild garlic which is situated in the far right of the w... 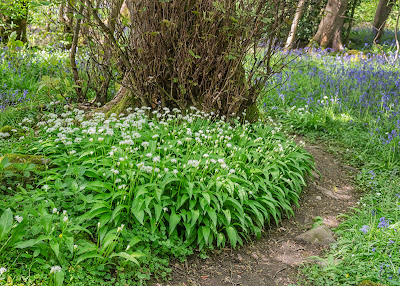 Norman Smith
My name is Norman Smith and I live in Bradford, West Yorkshire. I am not on here to meet anyone or form any relationship with anyone as I already have a very special person in my life and life is as good as it gets. I worked for a Financial Institution and am now retired. Most of my spare time is spent at my holiday home in The Lake District where many of my Blogs will originate. Having the Yorkshire Dales almost on my doorstep is am added bonus.I'm in my mid fifties, have always enjoyed photography but my interest really took off with the digital age. I've recently upgraded to a Z 6 and also have a Panasonic Lumix G9 with varoius lenses.. I passionately take most of my shots of the Lake District, Yorkshire Dales and the Highlands of Scotland, places I dearly love and I hope you enjoy them.