The Road to the Isles

Holiday time again. Me and Sal had a cottage booked in Badachro, Wester Ross for a week and, as I had always wanted to take her on The Road to the Isles and to Sanna Bay, we booked accommodation in Fort William for three nights on our way up.

After our long trip up, we decided on doing the short drive to Mallaig on Thursday and then do the longer day to Ardnamurchan on Friday. We made a good choice as the weather was much better on Friday. So off we went on The Road to The Isles.

We had intended stopping at Glenfinnan to visit Bonnie Prince Charlie's Monument but the car park was full and also the other two parking areas had been blocked off, presumably during lockdown. The weather wasn't that great plus the place was teeming with visitors so we wouldn't have seen the place at its best anyway. Sometimes its best just to move on.

The road is a sheer delight with beautiful Lochs, majestic hills, picturesque rivers and secluded bays and beaches accompany it's 40 mile route to the port of Mallaig.

The only settlements you come across are the sleepy coastal village of Arisaig (meaning The Safe Bay) and then a few miles further westwards Morar which gives its name to The Silver Sands. Morar and is also home to Scotland's shortest salmon river, namely the River Morar which is only 400yds in length.

The Arisaig area is also the place where Bonnie Prince Charlie embarked for France on the 20 September 1746 and The Prince's Cairn lies on the shores of Loch Nan Uamh, a few miles east of the village.

Morar was originally a crofting area so the present settlement is quite modern; having been built around the West Highland Railway's station which I presume was built there to serve the whole of the coastal peninsula.

Sal is a beach person so I took her to my two favoutites, namely Lon Liath which is just out of Arisaig and Camasdarach which is a few miles further on. Lon Liath is quite rocky and gives great views across to The Small Isles whereas Camusdarach is a sweeping sandy bay and looks over to Skye. We were lucky with the weather as the rain seemed to have stayed in the mountains even though there was a bit of a breeze at Camusdarch but then again there always is. We walked the full length of the beach and back and had the cobwebs well and truly blown off us. I think it was Sal's idea of heaven.

We did carry on to Mallaig but by then the rain had returned so we didn't get out of the car. The return journey was a bit miserable and we were accompanied by rain for the most part. Glenfinnan car park was still full despite of this but by then we were past caring and just wanted to get back to the hotel.

In the evening we had a smashing meal in our hotel before retiring to our room for an early night.

Cauldron Falls is a short walk from West Burton's pretty village green and is situated in a shady spot with another small waterfall and the remains of the town's lead smelting mill which used to serve the large number of small mines whose remains are scattered over the nearby moors. It is known as Cauldron Falls because of the beautiful plunge pool, and was one of the spots painted by Turner on his travels in the Dales. It stands on Walden Beck which runs for 9 miles (14.3 km) from the watershed on Buckden Pike before joining Bishopdale Beck before flowing under the main road in the valley to join the River Ure.

Cotter Force is further up Wensleydale and is the largest of the falls in Cotterdale Beck. It comprises of a series of six steps, each its own small waterfall with the largest single drop being about 5 feet (1.5 m). The force is not visible from the road but is well sign-posted and has handy parking places.

It takes only a short flat walk to reach the falls and when in spate, they can be soon seen and heard. There seems to be a shortage of footpaths in this area so its a case of paying them quick a visit and then retracing the path back to the road. Maybe that is why it is usually pretty quiet. It is a shame really because after rain they are very impressive and when lacking in rain they are so photogenic.

I did think about paying Hardraw Force a visit as well as it was only a couple of miles down the road but everywhere was so busy. The reason for me going would have been to photograph them so it would all have been pretty pointless because the narrow gorge and path would have been heaving with people.

All in all it had been a good day, just a shame that Hadraw had bee so busy. I returned home on the Ingleton road, turning off at Ribblehead for Settle and the A65.

Not a walk as such but just a stroll from the car to stretch my legs. I parked outside the village on the lane over to Malham and walked back via an old bridleway which I should imaging was the main route to the Church at one time. Due to the virus, the church doors were locked which turned out to be a bonus because as I came out of the grounds, I notice a signpost for Hawkswick which was just begging to be explored.

All paths in Wharfedale and its subsiduary valleys can be classed as beautiful and all have their merits but this one was particularly so. It followed the tree-lined River Skirfare as it meandered down Littondale to eventually meet up with The River Wharfe just outside of Kilnsey.

The last time I had been in these parts was spring when I walked in the opposite direction to Litton village. The River Skirfare that day had been just about dry, in fact in places it was dry. What a difference a good old British summer had made as the river today was in full flow.

I followed the path beside the river and through a few meadows until it started to veer towards the road. As I'm not a great lover of road walking (especially if they are narrow twisty country roads), I just retraced my footsteps back to the village.

I did consider having a beer in The Flacon Inn as the door was open but there was no-one about inside. It was a shame really as it would have been nice to sit on the village green in the sun for half an hour and enjoy a nice cool pint. It has always been a bit of a strange pub or should I say its always had a bit of a strange landlord. The last one was a right objectionable sod who made it obvious that he didn't like or want passing trade. Maybe it comes with the territory and the new one is the same!

A Wet and Misty St Ives

Not great weather to be walking in but still good to be out. Parked across from the golf course club house and as per usual, followed The Alter Way signposts all the way up to The Druid's Alter. I didn't hang around too long as the damp, humid weather had brought the damned midges out and they were having a good nibble on me. There was a nice atmospheric mist on the highest section of the walk which went through the woods and this made for some good photos.

Instead of doing my usual loop of the Estate, I went through the kissing gate at the highest part of the golf course and on to Alter Lane, heading back down that way. It shortened the length of the walk but made a nice change.

Coming back this way meant that I didn't pass The Ivy Cottage so no coffee for me. I couldn't have sat out anyway because everywhere was so damp and also it was busy with it being the school holidays.

The Road to the Isles

Holiday time again. Me and Sal had a cottage booked in Badachro, Wester Ross for a week and, as I had always wanted to take her on The Road... 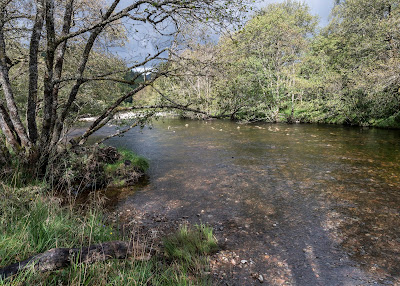