Giving The Trossachs a Second Chance


After saying a few years ago that I wouldn't be revisiting this area due to the camping management fiasco, I had a change of heart and gave it another chance. The reason for not going up was that the powers that be had decided to close off the only two parking areas by the side of Loch Chon which were suitable to have a photo stop and to have a stretch of the legs at the same time as they were going to turn them into dedicated camping sites. As photography was my main reason for going up there, this made my 300 mile round trip totally a waste of time. I like a drive out but not that long a drive out!

As it turned out, they had only turned one of the areas into a camp site which was a bonus but, on my outward journey, it was full. I decided to carry on to Loch Arklett where I took some belting midge-free photos and then drove the extra mile to the head of Lock Katrine for a much deserved coffee and cake at the popular Stronachlachar Pier Cafe. It sits beautifully at the head of the Loch and is surrounded by some mighty fine wild hill scenery. Ben Lomond, the only Munro of this area isn't too many miles away but unfortunately is hidden from view. Nevertheless it is still an impressive place to be.

After being fed and watered I decided to try the Loch Chon car park again and, as luck would have it, someone was just pulling out as I turned in. There were people fishing and some canoeists but apart from that it was pretty quiet so I spent a nice few minutes taking photos. I didn't hang around too long as I wanted to go for a walk at the other end of Loch Katrine which, as the crow flies, may not be very far but it's a different matter if you have to go by road.

Its a canny drive though and it takes in The Duke's Pass. The Pass is regarded as one of Britain's best drives and goes through some of the most scenic parts of the Trossachs landscape. It was originally built by the Duke of Montrose in the 19th century to improve access to his estate, and was later upgraded to accommodate the Victorian tourists drawn to the area after the publication of Sir Walter Scott's epic poem 'The Lady of the Lake' which celebrates the beauty of Loch Katrine and its surroundings.

This end of Loch Katrine with its very green and wooded environs is totally different to its wild and mountainous head. The hills are much lower and it has a very chocolate box, picturesque feel to it. I arrived just as the last cruiser was coming in to dock so the place very quickly emptied. I had a nice little stroll along the grandly named Great Trossachs Path for a mile or so and then turned round and headed back to the car. Time was getting on, I was feeling hungry and I had a drive of about 150 miles still to do so I wanted to crack on.

Looking back on the day, I did enjoy it and I'm glad I made the effort to go but I think my head was still up in the far North West Highlands where I had been a few weeks previous. Some places get the heart beating faster and the adrenaline flowing quicker; Wester Ross and beyond does that for me whereas The Trossachs, albeit they are beautiful in their own way, leave you yearning for bigger, wilder and more exciting places.

This walk was the last walk I did on the day before lockdown was put in place and I vowed then that it would be one of the first places I wo... 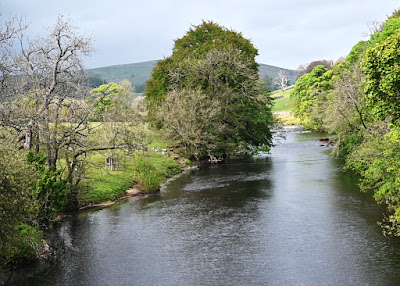