The Kelpies and Falkirk Wheel

We were both really glad that we had broken our journey back to the Lakes with an overnight stay in Sterling as the journey down from Badachro had been a torturous one. The A9 from Inverness to Sterling doesn't have much going for it, it is just mile after mile of endless traffic. Pitlochry is quite a scenic area but I find The Cairgorms so dull. The only saving grace of the trip down was calling in at a lovely village called Carrbridge where we found a local cafe and had a coffee and and a bite to eat. The sign for Sterling was a very welcoming one and thankfully our hotel was just off the M90 junction. We popped in to Sterling in the evening but it was raining and a Saturday night so I think it's safe to say that we didn't see it at its best.

As we were in the area, it would have been criminal of us not to go and visit The Kelpies and The Falkirk Wheel as they were only a few miles off our intended route back to Cumbria. The Kelpies are 30-metre-high horse-head sculptures depicting kelpies (shape-shifting water spirits), located in Grangemouth, near Falkirk. They stand next to a new extension to the Forth and Clyde Canal, and near to the River Carron, in The Helix which is a new parkland project built to connect 16 communities in the Falkirk Council Area.

They were designed by sculptor Andy Scott and were completed in October 2013. The sculptures form a gateway at the eastern entrance to the Forth and Clyde canal, and the new canal extension built as part of The Helix land transformation project. They are a monument to horse-powered heritage across Scotland. Built of structural steel with a stainless steel cladding, they are 30 metres high and weigh 300 tonnes each and were opened to the public in April 2014 in a ceremony which attracted 20,000 people.

Unfortunately the weather wasn't too kind to us and the main Visitor Centre and cafe were closed but there was a kiosk where we both had a coffee to warm us up. They are by far the most impressive sculptures I've come across and you really need to get close up to them to appreciate both their size and construction.They are also illuminated at night so a nighttime visit has been put on my bucket list.

A few miles away and many roundabouts later lies The Falkirk Wheel which is a rotating boat lift, connecting the Forth and Clyde Canal with the Union Canal. The wheel raises boats by 24 metres (79 ft), but the Union Canal is still 11 metres (36 ft) higher than the aqueduct which meets the wheel so boats must also pass through a pair of locks between the top of the wheel and the Union Canal.

In March 1999 Donald Dewar, the Secretary of State for Scotland, cut the first sod of turf to begin work at lock 31 on the Forth and Clyde Canal and the wheel was opened on the 24th May 2002 by Queen Elizabeth II. Over 1000 people were involved in its construction.

One interesting fact is that the wheel was fully constructed and assembled at the Butterley Engineering plant in Ripley, Derbyshire. The structure was then dismantled in the summer of 2001, and transported on 35 lorry loads to Falkirk, before being reassembled into five sections on the ground and lifted into place. The wheel replaced a flight of 11 locks.

We were fortunate in arriving just as they were getting ready to raise the first boat of the day and it really is an amazing sight to behold. The final photos of the blog show you how it raises and lowers the long boats better than any description I could give.

The day had been an interesting and educational way to end our holiday and a complete contrast to the previous 10. I always find it hard to readjust when I've been away, especially when I've been up to The Highlands and I think Sal was the same. We were glad we stopped off in Falkirk but we were damned glad to get out of the place again and have a couple more quiet days in The Lakes.

There are very few place which I like to visit when its wet but the woods down Borrowdale are one of them. For some reason they doesn't ... 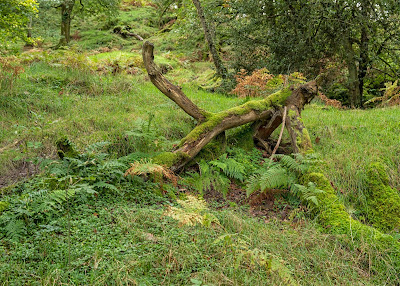